Inspiration
15 comments on Dinovember ’18: The Story So Far…

So, now that we are more than halfway through the month of Dinovember I thought I’d give you a round up of what our dinos have been getting up to.

If you’re thinking what the Triceratops is Dinovember then click here to read more.

This year we’ve learned that the dinosaurs can’t escape from our new toy box, unless we remember to leave the lid open before we go to bed. By this I mean there have been a couple of nights where I’ve completely forgotten about them, and also a few when I’ve been just too exhausted and I couldn’t be faffed. Either way, the toy box lid has been blamed for hampering the dinosaur’s escape plans and I’m sticking to that story.

We started our Dinovember the night of the 1st November again because I didn’t want the dinos to interfere with Halloween and to be honest by the time I’d got both boys back from trick or treating and taken off all their facepaint and glitter (well, moved the glitter about a bit…hate the bloody stuff #indestructable) then got them to bed and nursed Eli, I’d lost the will to live!

This year we have a new giant T-Rex to add to our fellowship of dinosaurs. He arrived in June for Stanley’s 4th birthday and was destined to take the lead in their adventures.

If you are considering Dinovember in the future I’d recommend dinos with open or adjustable jaws and a few raptors because you can use their mouths and arms to hold props. You’ll notice that the same dinos take centre stage in most of our scenarios for this reason. I definitely need to invest in a few more before next year. If however you know us in real life, then the boys would absolutely love a few more for their birthdays, wink wink. 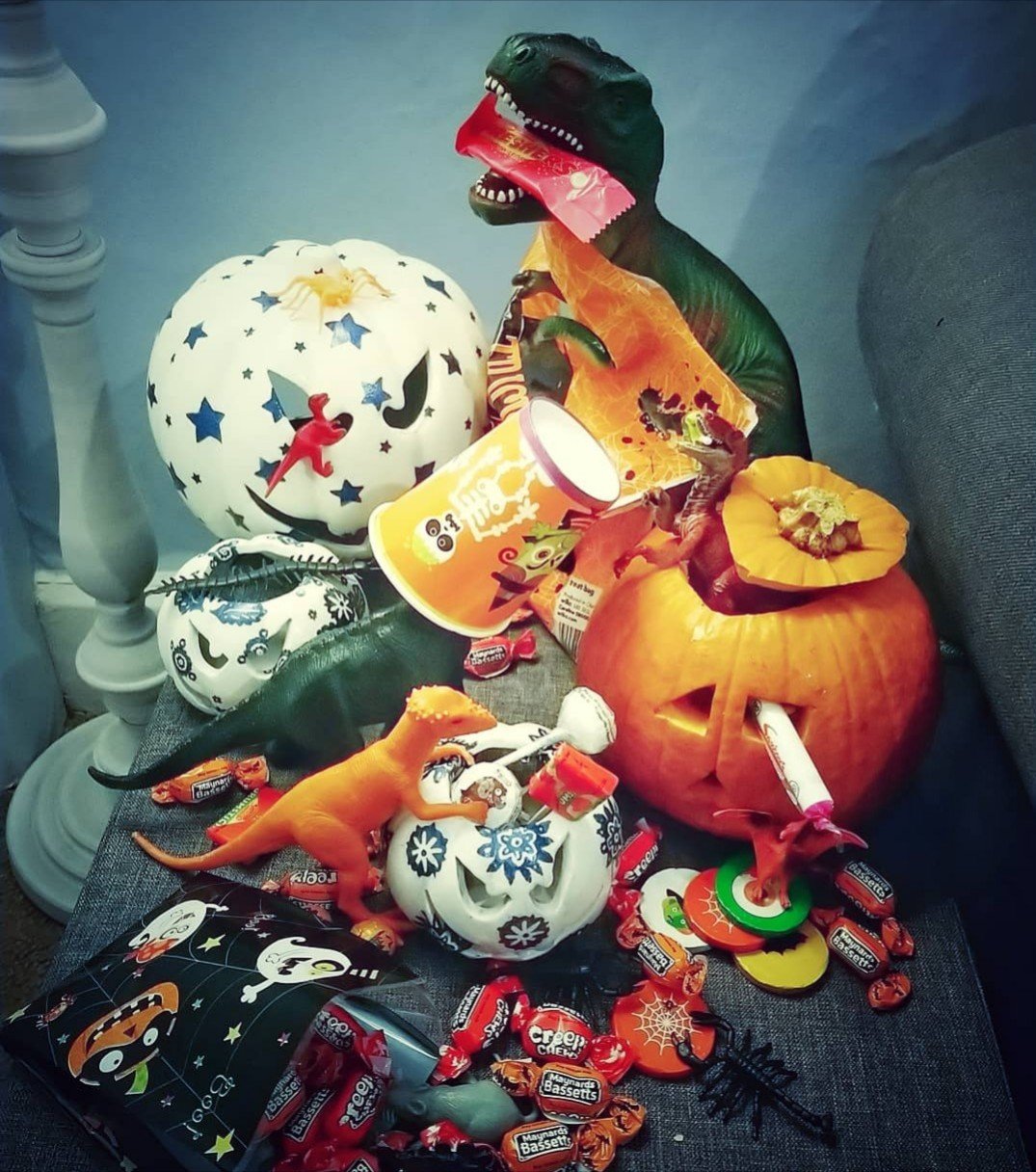 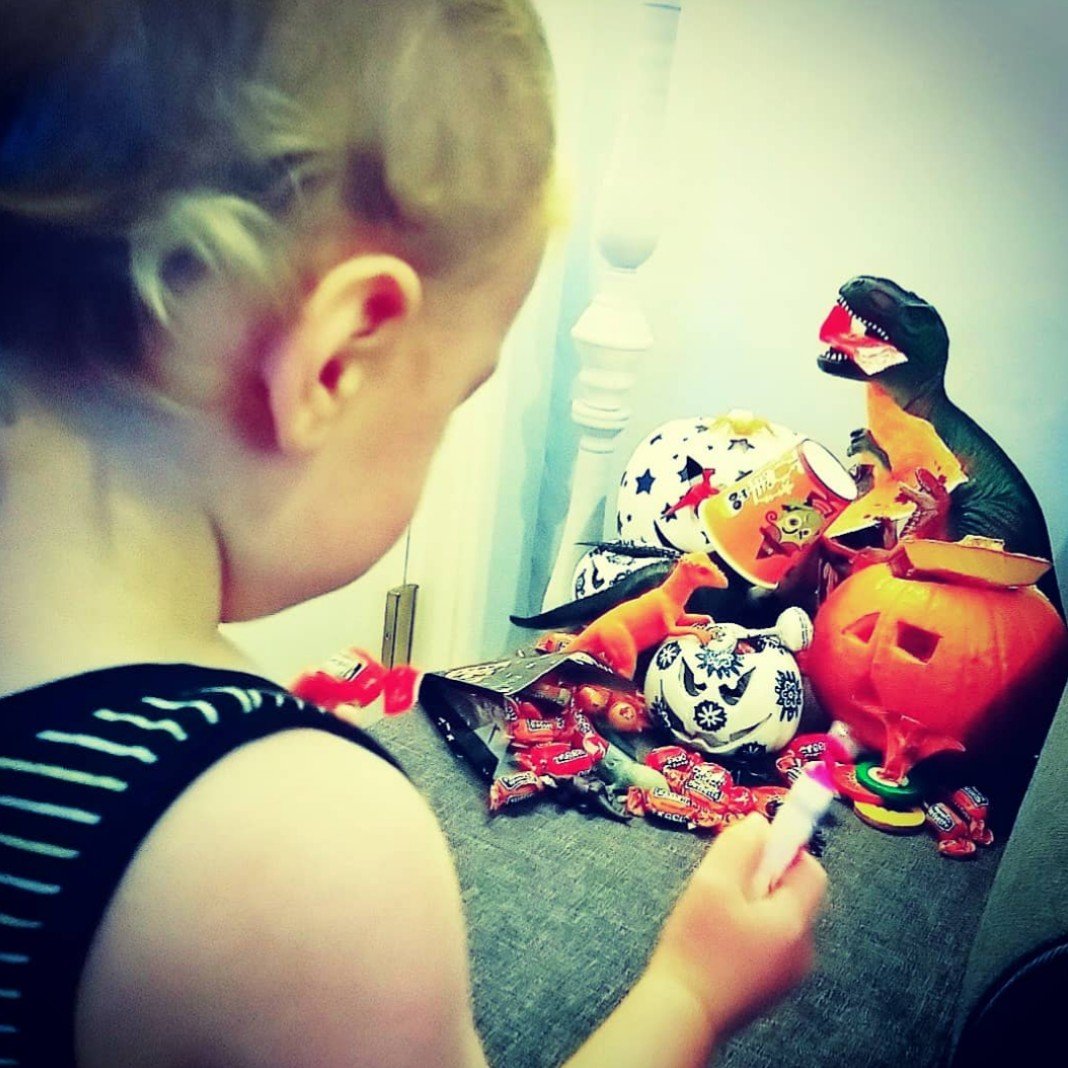 Ok, this was a slight cop out as we started the same way last year….the dinos have escaped and found the Halloween sweeties and decided to indulge their sweet tooth (THE best way to disguise the fact that me and Ben sat watching Netflix and eating the boy’s sweets while they were in bed #win).

It’s the first time James has been involved in Dinovember. On discovering them, he made sure to retrieve his favourite sweets!

Notice the darkness of these photos, that’s because we were downstairs and had discovered what the dinosaurs had done before 5.45am…joy!

This was an simple one to throw together. Stanley seems to love it when the dinosaurs use his other toys to make a mess. I just built a few ‘towers’ from the Mega Bloks and added in some Brio track and construction vehicles. A high vis vest for the project manager completed the scene.

It’s no use hiding Ste, we all know it was you!

Again, this was a simple idea that worked really well. I was struggling to think of what to do but inspiration hit when I changed James’s nappy before putting him to bed…a pack of nappies, wipes and a few chocolate raisins was all it took.

The look of horror from the boys as I ate some of the poo made it totally worth the effort. Anything involving poo is like a magnet for them, both Stanley and James find it absolutely hilarious. 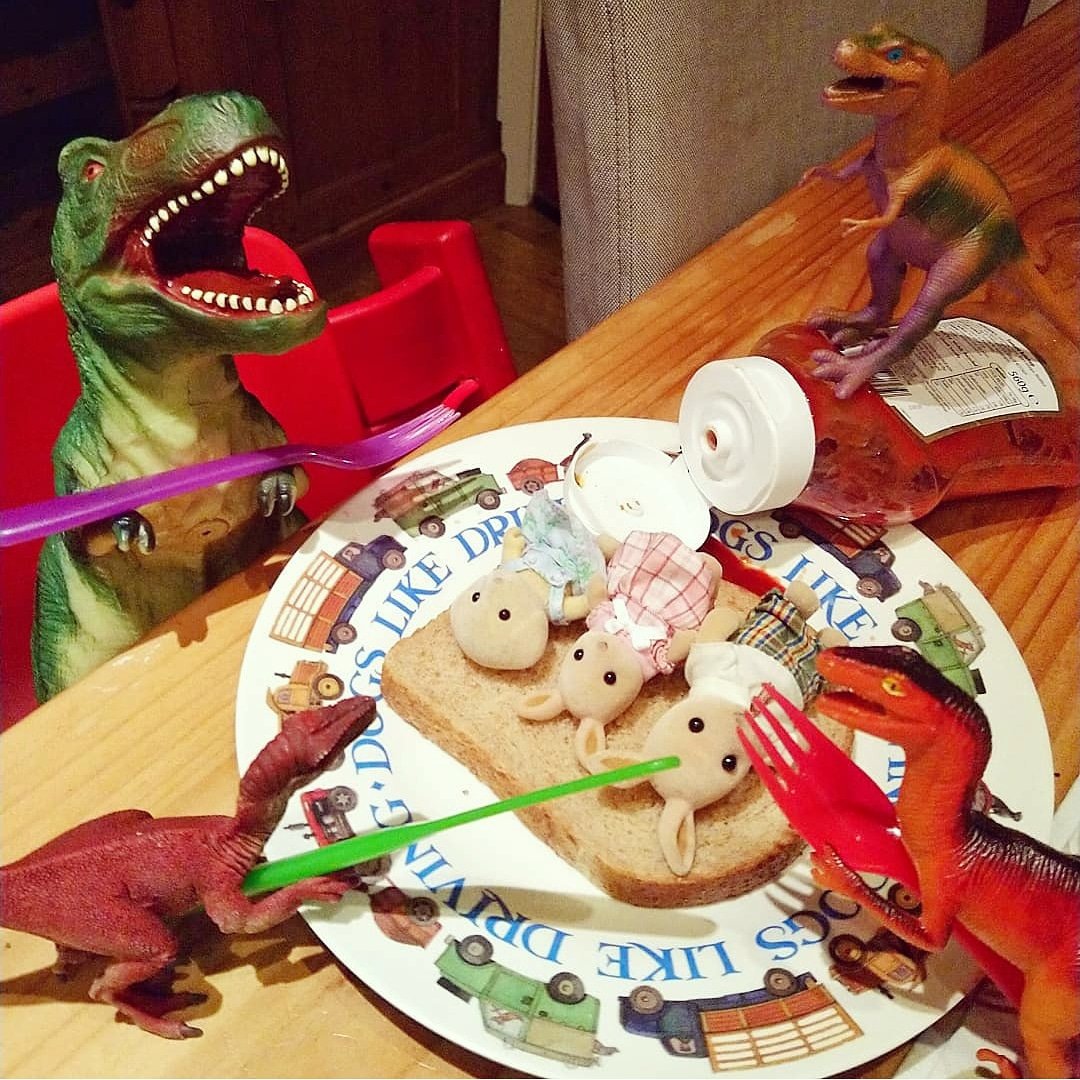 They may be made of plastic but there’s no denying their DNA!

A change of scenery for this one, the dinos have started to explore the rest of the house.

I’ve got to admit this one cracked me up when I was setting it out. Anyone for a Sylvanian Family sandwich?

As we’ve been forced to be in the house a lot due to the last few weeks of my pregnancy and then Eli’s arrival, I’ve done crafts and little projects with Stanley in an attempt to relieve his boredom.

He’s a fan of CBeebies Mister Maker and so the Mister Maker Club boxes have been a bit of a lifesaver. Also, Stanley gets super excited whenever post comes with his name on!

As the fifth night was Bonfire Night the dinos decided to make a rocket from one of the Mister Maker kits.

The boys loved it, especially as they’d left the stickers for Stan to decorate the rocket with.

No such thing as bad weather, just bad clothes! Not even the dinosaurs like a wet and cold school run.

This was a ‘skin of my teeth’ arrangement that I managed to pull together in the morning before the boys got up…phew!

Now, I liked this one. It was easy, simple and the colours made for a good photo. The bathroom was breeched.

Stanley & James had a sleepover at Nana’s house and unfortunately the dinos hadn’t been invited.

Poor Rex is rock and roll just like the rest of us, doing laundry on a Saturday night.

This one got a few belly laughs from Stanley, especially because Rex was wearing a pair of his PJ Masks underpants.

It’s World Kindness Day and the dinos had some special visitors. The Kindness Elves showed them how to be a bit more considerate of others. Stanley woke up to Rex and Ste making him a nice hot chocolate.

He may have a RAWWRRSOME reputation, but really Rex is just a big baby! Newborn nappies are a good fit, and who knew that nipple shields make fabulous hats?

For such a large dinosaur a T-Rex has a surprisingly small pain threshold…this is something the poor paramedics soon discovered! A masking tape cast, plasters, a few grapes and a toy ambulance were the only props needed.

I’ve pinned lots of Dinovember ideas to my Pinterest board, to see it click here. Some of them are absolutely amazing, I am in total awe. But, most of them require more forward planning that I can possibly commit to at the moment.

I’ve found juggling the boys bedtime routines plus feeding and settling a newborn, AND remembering to do the dinosaurs quite a challenge…albeit one I’ve enjoyed. Yes, I’ve missed a few nights when I’ve just been too exhausted or I’ve prioritised relaxing and watching a film…it hasn’t mattered one bit to Stanley. He’s adamant that the toy box lid is too heavy and if we forget to leave it open then the dinosaurs can’t escape. ‘It doesn’t matter Mummy, they like it in the toy box too. They can have a rest’

Imagination is the key and luckily fills in any gaps. Stanley will even create little stories around the dinosaurs’ antics and tell me why they’ve done something or how they did it, which is great and lovely to hear.

I hope this post has made you smile, or given you some ideas for your own Dinovember? Yes, it can be a bit of an effort and people think I’m crazy when Stanley tells them about the dinosaurs BUT in my opinion seeing the magic through your little dino fan’s eyes is more than worth it!

And who doesn’t love Dinosaurs?

If you would like to check out what Rex and Co get up to for the remainder of the month head on over to my Instagram.

I’m Emma, wife to ginger Yorkshireman Ben and Mummy to Stanley, James and Eli. I love a kitchen disco, keep chickens, tend an allotment, plan adventures and have a positive approach to life. You’ll find me living in a terraced house with far too many boys, in the small town of Leek within the Staffordshire Moorlands, on the edge of the beautiful Peak District.
Previous Post
Next Post