These last few weeks have been long and tough, I’m not afraid to admit that actually I’ve really struggled…lack of sleep and an aching, heavy and ungainly body don’t really mix well.

I can normally get me and the boys up and out at a reasonable hour, ready for a day out. But recently I’ve found myself still pj clad mid-morning, and still sat (uncomfortably) on the sofa at lunchtime lacking all motivation to go anywhere at all. I’ve tried my best for the boys sake to still get out once a week at least, but it’s been a huge effort on my part.

It hasn’t helped that along the way I’ve also had an infected arm from my whooping cough vaccination and sciatica from the baby lying low. I’ve plodded on regardless, making adjustments as I went…I now sleep on the sofa more than in my bed (it’s higher and easier for me to roll off of when James wakes up) and I’ve decided to ignore my fitbit, as getting told you’ve had less that 4hrs sleep a night is just downright depressing.

But this week I’ve hit THE WALL. I’m no spring chicken and after two previous pregnancies, I like to think I know my body reasonably well and I can recognise the signs when something isn’t quite right. So, I have had to ask Ben for help…I needed to rest before I became really ill. Ben certainly isn’t blind and he’d seen it in me too. He’s been getting home from work and cooking tea and carrying James to bed etc because I just can’t do it. By 5pm, I’m physically done in. I am aching, bits of me are swelling and I’m beyond exhausted. Generally, I’m feeling a bit useless and sorry for myself.

Yesterday I spent just over an hour in the front garden cutting back the Buddleia, Astilby, Honeysuckle, Rose and Raspberry bushes…we had lovely new front and back doors fitted on Friday and, (just like when you’ve decorated a room, and instantly all the others look shabby) the garden was letting the side down. Job done albeit very slowly and usefulness slightly restored, I went in and packed a bag.

On Ben’s suggestion, I folded my voluminous maternity pj’s along with a few toiletries into my bag, kissed all my boys goodbye and grabbing my hospital bag on the way out, waddled (I would have skipped if I could) to my car. I was going on a mumoliday.

I arrived at my accommodation for the night, and it was just as cosy and welcoming as I remembered.

Mum flicked the kettle on, and before I knew it I was sat enjoying a HOT coffee and adult company WOW!! Yes, I know I see my mum at least once a week if not more…but this was completely different. We chatted freely and caught up on conversations we’ve been trying to have for months. You see, there were no little people clambering up onto our knees or interrupting to show us a wooden train or asking for a drink and/or snack. There were no suspicious crashes from other rooms that forced one of us to jump up and investigate or survey the damage.

It was just us, and it was a rare kind of bliss.

I changed into the aforementioned voluminous pjs and tied my hair up into a messy bun (I’ve apparently nailed the #slummymummy style). Me and my elasticated waistband eagerly awaited the knock on the door that would bring our Indian takeaway.

Once we’d eaten we put a film on, continued to talk and didn’t watch any of it. Mum was tasked with removing the Jackson Pollock style effort I’d made of painting my toenails (I’d really really tried but contortionism isn’t one of my skills) and repainting with some glittery polish. I may well turn into a sweaty, red faced, grunting beast while giving birth but I WILL have pretty sparkly toes!!

I checked in with the hubby, and instantly felt guilty because he was having a complete nightmare. James wouldn’t settle in bed and Stanley having gone up was still crashing about playing in his room. Usually, James goes to bed fine and goes off easily, but wakes throughout the night. Thurs night I’d had to get up 12 times. Ben told me everything was under control and to enjoy the rest. I didn’t need asking twice.

I didn’t go to bed particularly early, it was just too nice spending time with mum BUT, I did sleep soundly all night. Obviously, there was the usual tossing and turning of my heavily pregnant body trying to get comfortable and the inevitable trips to the loo but I had a FULL night’s sleep in an actual BED. I wasn’t woken up at 6am by a crying James and I didn’t have to suffer through early morning kids TV fuelled only by a decaff coffee. My fitbit was my friend again, and informed me I’d had over 8hrs sleep and I was rewarded with a little green star. I finally waddled into the kitchen to make coffee at 10.30am!! To me it felt like the middle of the afternoon. 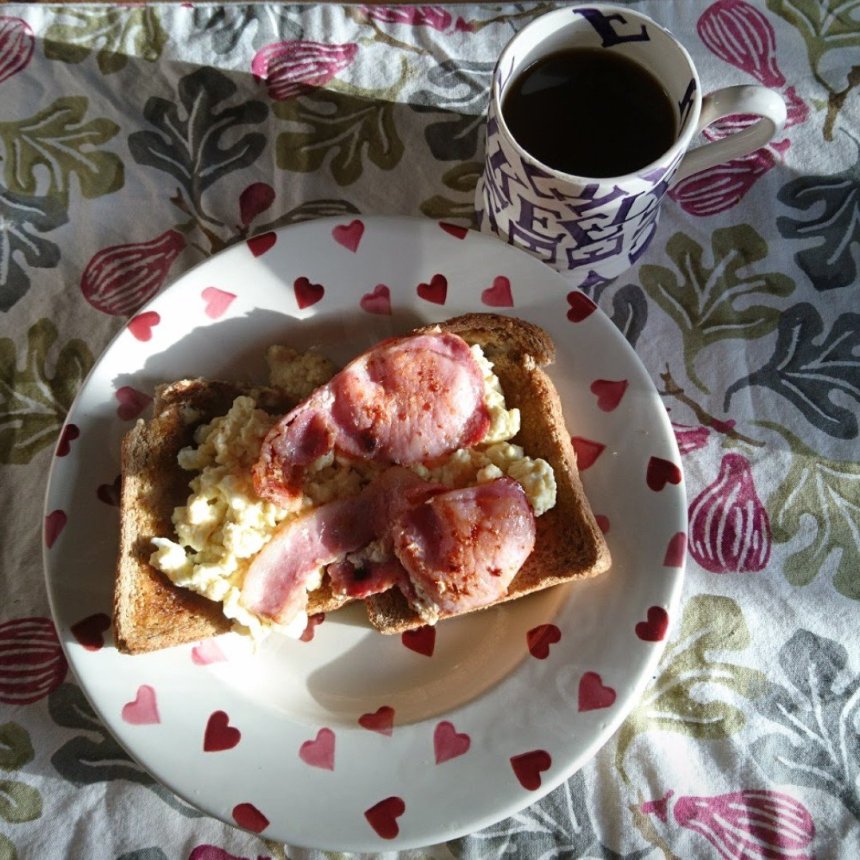 Then, today was also spent at a leisurely pace, a bit of shopping for the baby, a few things for the boys and stops for coffee. I arrived home at around 3.30pm (with mum in tow) which was just a couple of hours short of a full 24hrs after I left. We came back to a lovely Sunday dinner cooking, an understandably exhausted Ben, and two loud and boisterous boys.

I know it doesn’t seem like much but 24hrs away from my boys is a long time for this particular mummy. I know that other mums do this regularly and good on them, it certainly makes you feel a lot more human!

Generally, I’m someone who can get by on not a lot of sleep (which is a good job really as I seem to make nocturnal children) but I think I’d reached the point in this pregnancy that I just needed a proper night’s rest.

Granted, I didn’t jet off to an exotic location or even check in to a luxury spa hotel for a bit of pampering BUT I have thoroughly enjoyed my mini mumoliday. With a third little man due in a matter of weeks (I’ll be full term a week from now) I know I’m not going to get the opportunity for another one for quite some time.

When I was trying to think of a description of my little break for this post I came across the terms mumcation and mumoliday (see, I didn’t make it up). It’s apparently very much a thing now.

According to American psychology professor Dr Nava Silton, minibreaks without children are “essential” to a mother’s wellbeing and, therefore, good for the children too.

Who can argue with that?

Read more about why mums NEED a mumcation here

Some of the examples I have come across involve mums jetting off to sunnier climes with their besties, and leaving all their kids at home. I’m not sure I could EVER take that step, but I could certainly do the odd night here and there to recharge my batteries.

No time for a mumoliday? Follow these tips from Sarah at Whimsical Mumblings on ways to practice self care, and you’ll be feeling refreshed in no time!

You’re probably wondering if Ben survived my mumoliday? Of course he did, he’s a pro, but 24hrs of flying solo had taken its toll. I definitely noticed a tinge of grey to his complexion and a couple of nice eyebags when we got back.

I’m currently writing this from my sofa, where I’ll ‘sleep’ tonight. It’s getting on for 11.30pm and I’ve already been up to both boys (James 3 vs Stan 1). James is teething again, he’s a little warm and has had the sickly sweet smelling dirty nappy that only the onslaught of teeth pushing through can bring (sorry if that’s a bit TMI, but if you know, you know right? ).

Back to reality with a bang eh?

Ben went to bed at 9ish, it’s deathly quiet up there so I would imagine he’s in some sort of sleep deprived coma by now.

So, that was my weekend. A bit of a break from the norm for me (and Ben too, as he doesn’t usually do the night shift). But it was a much NEEDED rest and I feel a lot better for it. As for tonight, my expectations are already low, I’m just hoping against hope that things settle down before the baby arrives!

I'm Emma, wife to ginger Yorkshireman Ben and Mummy to Stanley, James and Eli. I love a kitchen disco, keep chickens, tend an allotment, plan adventures and have a positive approach to life. You'll find me living in a terraced house with far too many boys, in the small town of Leek within the Staffordshire Moorlands, on the edge of the beautiful Peak District.

11 replies to My Mini Mumoliday.

I'm Emma, wife to ginger Yorkshireman Ben and Mummy to Stanley, James and Eli. I love a kitchen disco, keep chickens, tend an allotment, plan adventures and have a positive approach to life. You'll find me living in a terraced house with far too many boys, in the small town of Leek within the Staffordshire Moorlands, on the edge of the beautiful Peak District.